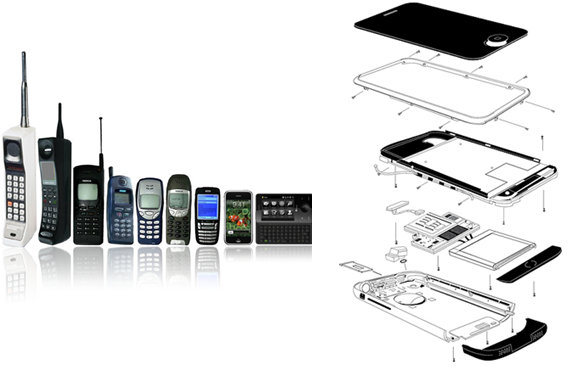 Mobile phones allow users to communicate in speech or writing on the move. Mobile phones are part of evolving electronic products. Thanks to the miniaturization of electronic components, these products have become more compact and now include an increasing number of features.

Mobile phones are differentiated by their size, there are generally three different form factors. Bar, flip (or clamshell) or slider. There are also several types of interface, keyboard, touch screen or mixed. However there are mostly four to five subsets that are the screen, the battery, the shell, an electronic card and a keyboard.

The functions offered by a average second generation mobile phone that will be considered thereafter are:

Composition of a second-generation mobile phone


Figure 2: Changes in the number of mobile lines in France (Source ARCEP)
Regarding to number of mobile lines, it is estimated the current fleet of mobile phones in circulation to over 60 million. Nevertheless, according to a study conducted in July 2008 by a mobile phone maker, only 3% of users would recycle their old phones. In addition, 44% of unused mobile phones would be stored in a drawer. This suggests a potential source of products to recycle much more important.

Depollution and recycling of the product

During the depollution phase, only the battery is removed from cell phones, the rest is then ground for further recycling. Batteries are sent in treatment facilities suitable for the treatment of heavy metals such as cadmium, which can be present in these components.

After depollution, mobile phones are treated as all SHA, namely crushed to sort recyclable materials. Mobile phones have printed circuit boards with a significant amount of metals with high economic value. The metal reached include:

The table below provides some ideas to improve the recycling of WEEE. These ideas are from studies on the recycling of some products and difficulties encountered by treatment operators responsible for the treatment of WEEE. These areas for improvement can initiate a deeper reflection from producers. However, each product has its specificities and a number of other constraints to fulfill.

(1) To solve the problem of chargers, in 2009, the European Commission has prompted manufacturers to think about and agree on a common charger format. Fourteen manufacturers have agreed to ensure compatibility of their products with a micro-USB type charger: